Once forgotten Portugal has quickly been gaining popularity. So much so that Lisbon is planning to build a second international airport. Lisbon is cheaper than many European cities, boasts blissful weather, has several easy day trips nearby, and is making a name for itself in the culinary scene. Walking the streets you can see the city undergoing a renewal phase. Buildings that were once crumbling are being restored and streets that were once seedy and sketchy are now hip.

Now before we get into the 10 BEST things to do in Lisbon Portugal I want to address cost. I still read to this day articles, blog posts, etc., that paint a picture that Lisbon is insanely cheap. I personally did not find this to be the case. Past visitors I had talked to stressed that Lisbon was dirt cheap. That may have been the case 5 years ago but it became obvious pretty fast prices have risen. Seville, Spain for example was much cheaper than Lisbon. Compared to other big cities like London and Paris though it was still a great deal. I visited in slow season in February and had the hardest time finding a decent hotel for under $200 a night, something I can easily do in almost any other European city. Food prices were more expensive than Seville and more along the lines of Madrid prices.

I believe it's important to set expectations correctly. Now that I have visited would I visit again? Absolutely! I just wouldn't advertise that it's one of the cheapest cities in Europe to visit. Now that we've got that straight...let's continue to the 10 BEST things to do in Lisbon Portugal!

Continue reading 10 best things to do in Lisbon Portugal or save it for later! 10 BEST THINGS TO DO IN LISBON PORTUGAL

The Alfama is the most picturesque and instaworthy neighborhood and should be near the top of your list of 10 best things to do in Lisbon Portugal. It’s one of the few areas that survived the 1755 earthquake and maintained its original winding cobblestoned streets. The Alfama dates back to the Visigoth occupation from the 6th to 8th centuries A.D. and later became home to the fishermen of Lisbon. It’s filled with homes from the Middle Ages, history, and character.

Sao Jorge Castle is the highest point of the Alfama and the perfect place to start exploring this characteristic area. I personally don’t think the castle is actually worth touring as it's quite bare and forgettable. The area surrounding the castle is perfect for strolling and finding quiet streets. After the castle visit the viewpoints (below), and then explore around Largo de Sao Miguel, Alfama’s central square. The steep hills of Lisbon offer some stunning views of the city below which is why visitng the top viewpoints easily makes the list of the best things to do in Lisbon Portugal. During your walk in the Alfama be sure to stop at two of the best viewpoints in Lisbon. Miradoura de Santa Luzia and Miradouro das Portas do Sol.

Hop across the border to Spain! See my Spain posts:

TOP 10 THINGS TO DO IN GRANADA SPAIN

A WEEK IN SPAIN – ITINERARY FOR MADRID, SEVILLE, GRANADA 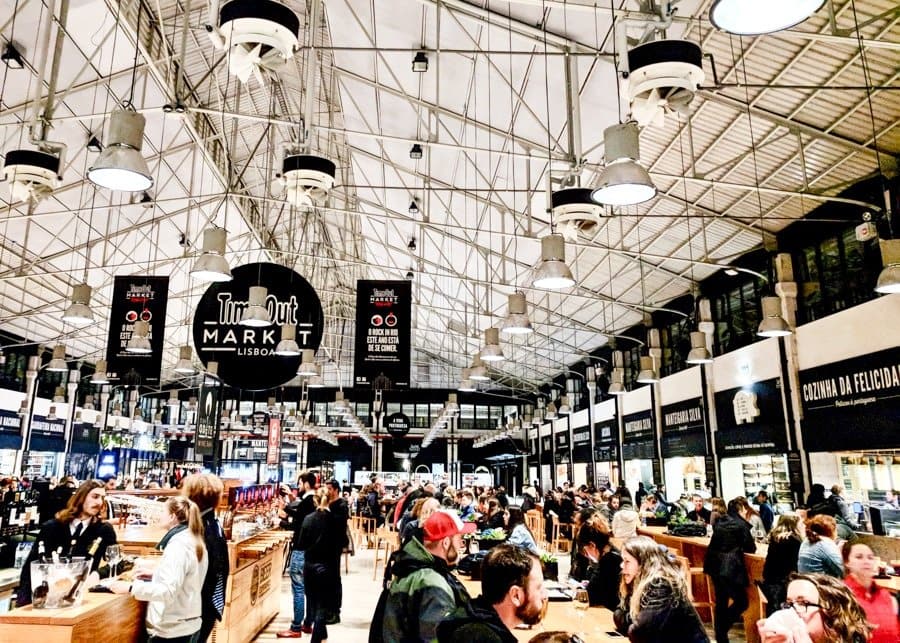 Time Out is known for their magazines and website publishing city guides, insider tips, travel trends, and more. You're probably already familiar with this name If you're a frequent traveler that plans your own trips. Time Out has now entered the food market scene opening their first food market in…you guessed it…Lisbon! Time Out Market Lisboa opened in 2014 and quickly became a hit with locals and tourists alike. If you are a foodie or someone that wants to be the first to discover a new trend this is a must.

Time Out plans to open 7 more markets in the next few years…which means Time Out Market Lisboa was a success. This hip food market is the best way to try a mix of Portuguese, food, drinks, and sweets. For those that think food markets have subpar food think again. The stalls at the North end sells wallet friendly bites from Michelin star chefs from all over Portugal. The communal tables make for a fun time if you want to make friends with like-minded tourists and friendly locals.

If you're a foodie this should be at the top of your list of best things to do in Lisbon Portugal.

Similar to San Francisco, Lisbon is known for its hilly streets. These steep treks make for a perfect e-bike tour. You’ll be able to zip around Lisbon’s most popular attractions and get a lay of the land in no time with barely breaking a sweat. Jake and I did the Central Lisbon Tour by Bike a Wish. It was the perfect start to our time in Lisbon as it gave an overview of Lisbon’s history and got us comfortable with the lay out of the city so we could easily navigate by foot later.

Here are some other bike tour options! 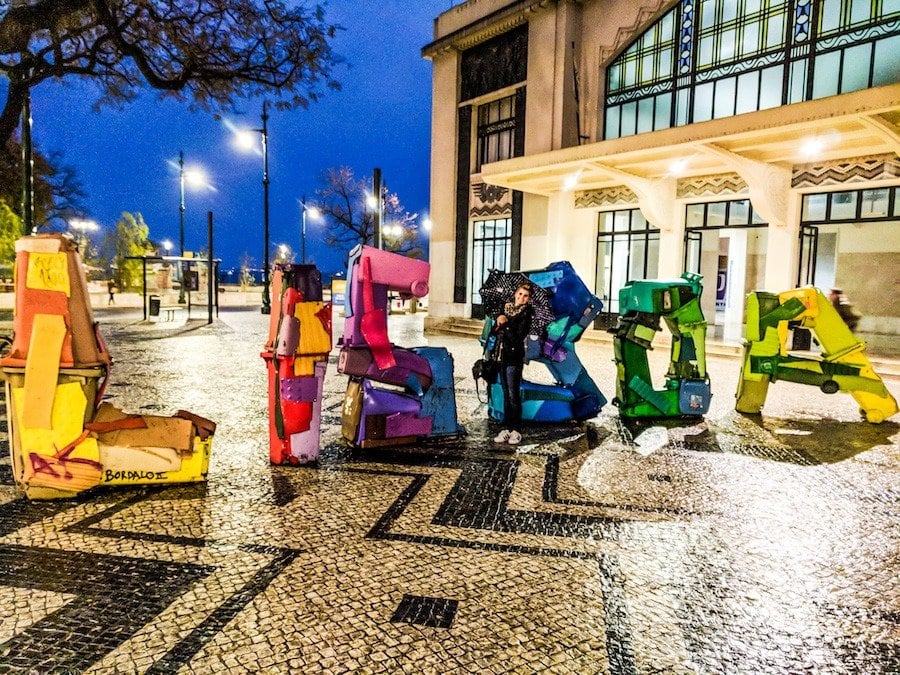 Lisbon’s historic downtown area is located between two hills in the flat valley. This area was completely rebuilt after the 1755 earthquake and therefor has uniformity, wide pedestrian streets, old and new shops, and is the perfect place to people watch and stroll. Checkout the beautiful exterior of the Rossio train station and shop down the Champs-Elysees inspired Avenida da Liberdade.  Leave Baixa and enter Barrio Alto and Chiado via the Elevador da Gloria.

Lisbon is known for its steep hills similar to San Francisco. There are three popular cable cars, which are labeled lifts or elevators in Lisbon, to get people to the top of some of the steepest hills. Elevador da Gloria is one of the most popular as the end of your ride gets you to a beautiful view point, San Pedro de Alcántara. You can buy your ticket from the driver for 3.60 euros. This is also an easy way to get from the lower Baixa neighborhood to the higher Chiado and Bairro Alto. 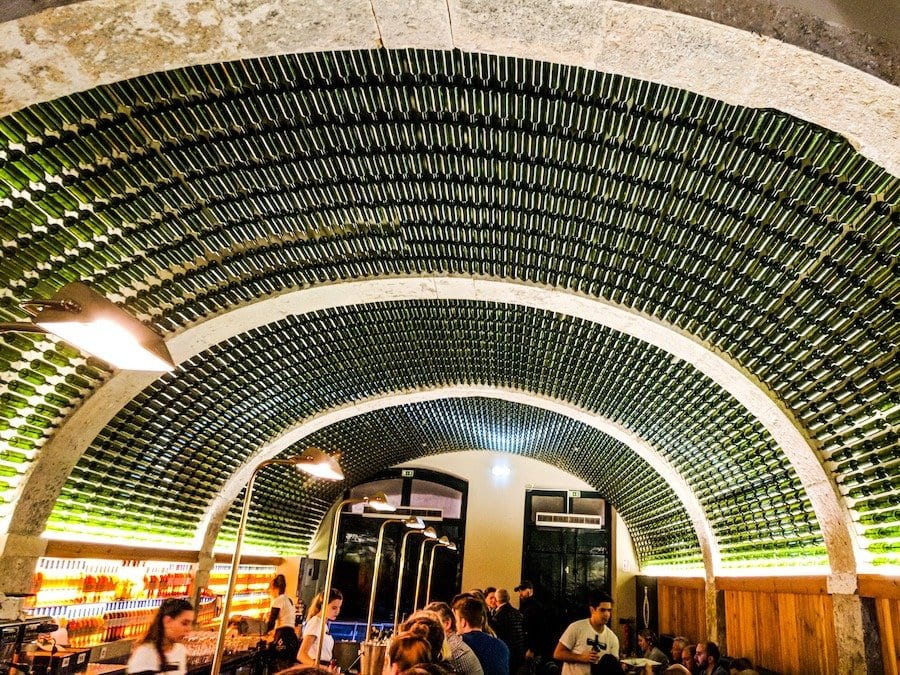 7) Eat and Drink in Bairro Alto and Chiado

Bairro Alto and Chiado are above Baixa and the perfect place for restaurant and bar hopping. Chiado is trendy and chic while Bairro Alto has an old world vibe. This is also a good area if you want to catch a Fado show. Fado originated in Lisbon and is known for its blues styled music filled with melancholy and mournful lyrics accompanied by the Portuguese 12 string guitar. If you've been to Southern Spain you'll be familiar with Flamenco. Flamenco is to Seville as Fado is to Lisbon...which unfortunately means most Fado shows will be geared towards tourists but it still makes for a fun night.

Some of my favorite spots in this area are:

Praco do Comercio, aka Commerce Square, is the bustling riverfront square in the Baixa neighborhood. The royal palace was located in the square before the earthquake. Now you will find Lisbon’s Arch of Triumph, government buildings, and plenty of locals and tourists passing through. Walk down Rua do Comercio after enjoying the square.

Take trolley #15E from Praca da Figueira or Praca do Comercio to reach the district of Belem in about 30 minutes. Belem escaped the devastation of the 1755 earthquake and is home to important sights from Portugal’s Golden Age. Make sure to visit the impressive and massive Monastery of Jeronimos. Torre de Belem, Belem Tower, has become a popular Instagram location and a visit to Pastel de Belem for the original Portuguese pastry is a must. Some say Pastel de Belem has the best Pastel de Nata pastries in Portugal. 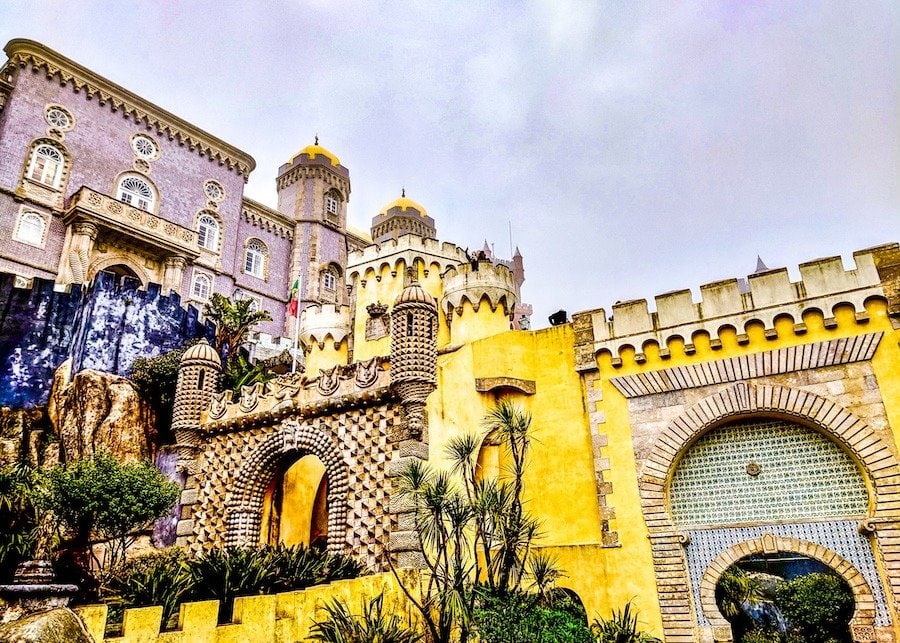 Sintra is home to one of my favorite and most colorful castles in Europe, Pena Palace! This is where Portugal’s wealthy retreated to and the summer home of the king and other royals. It’s an easy day trip from Lisbon being a quick 40 minute train ride from Lisbon’s Rossio station. Try to visit Tuesday – Friday when the crowds have lessened after the weekend rush and arrive as early as possible.

Pena Palace, with its brightly painted exterior of yellows, blues, and purples, is the main attraction. Instagrammers, travel blogs, and magazines like Travel and Leisure, have featured the unmistakable Pena Palace as it’s quite unique and well preserved. A visit to Pena Palace is a MUST and without a doubt one of the best things to do in Lisbon Portugal...even if it isn't technically in Lisbon.

If you plan to just tour Pena Place and walk around the main town you can make this a half day trip. A full day is required if you decide to visit the other sights, not nearly as memorable, like the Morrish Castle ruins and National Palace.

Consider a tour to Sintra if you want someone to do the planning for you!

See my Spain and Portugal posts!

Some links in this article are affiliate links, which means that if you purchase through them, I earn a small commission. This will never cost you extra and the income goes to keeping this site updated and free for everyone! 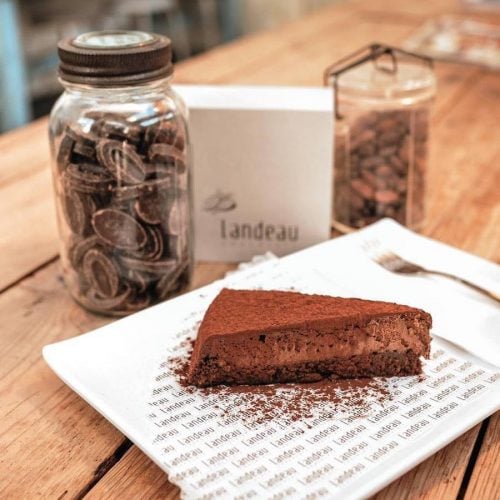 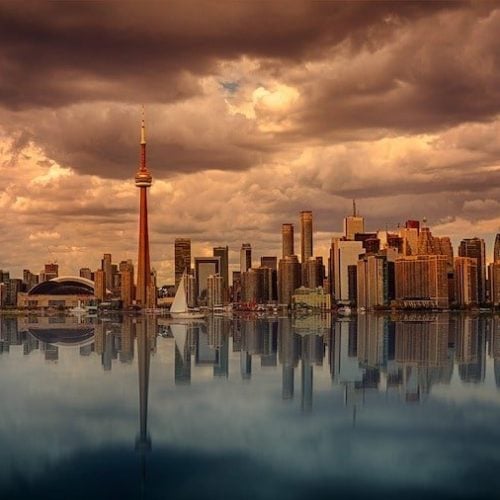 A Long Weekend in Toronto | TOP 10 Things to do 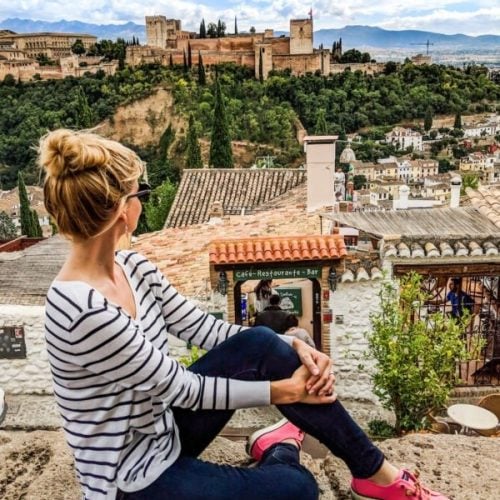 keeping trips within the realm of reality for ordinary people

📸 Without a doubt, the best street in #sanmigue

💜 See those purple trees in the background? Tha

💜I must say, spring is a delightful time to vis

Want to know the☝️question I’ve been asked a

🇲🇽I finally had time to go through our #sanm