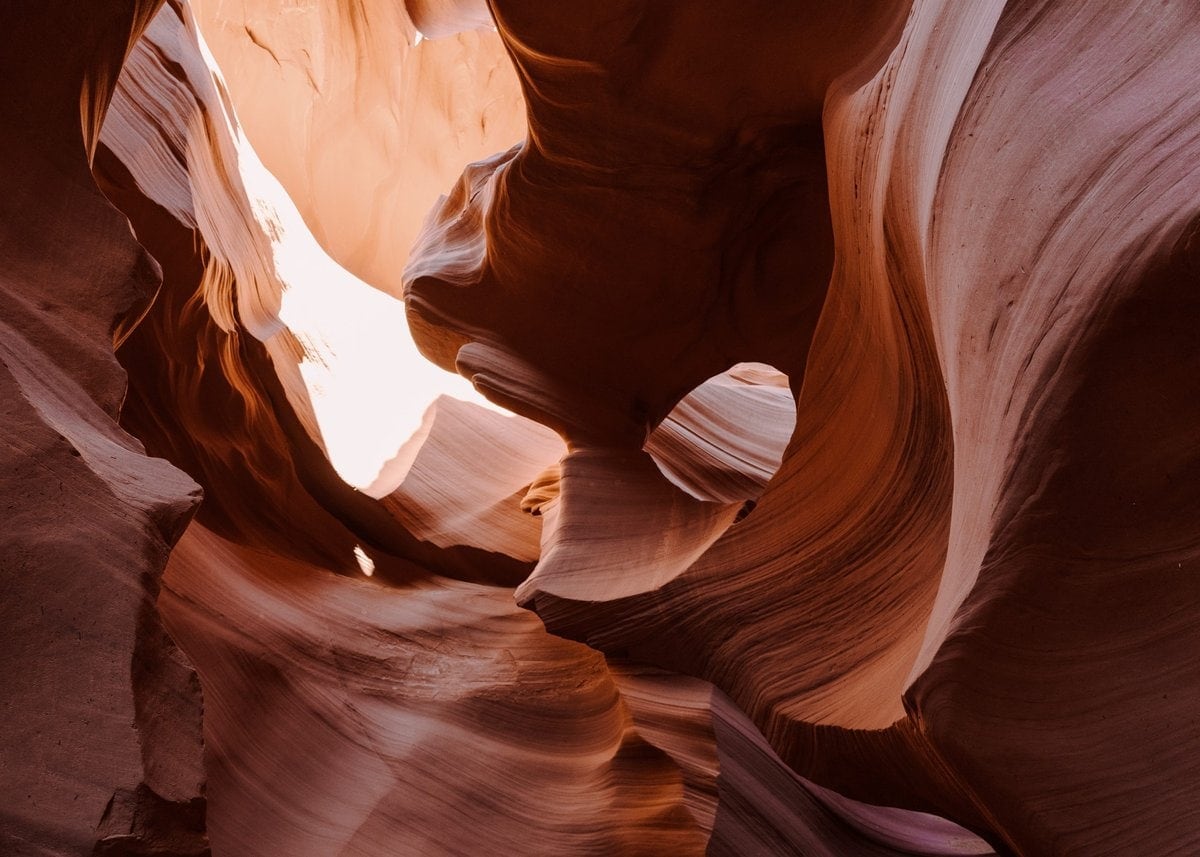 Visiting Antelope Canyon is a must if you're headed to Page, Arizona. For those short on time (or hoping to save some money), this post will discuss Upper vs Lower Antelope Canyon and which experience is best.

Jake and I just got back from our road trip through Utah and Arizona. One of the highlights was visiting Antelope Canyon.

Before our trip, we debated between Upper vs Lower Antelope Canyon. Getting to Page, AZ is no breeze and we didn't want to come all this way and spend our time at the wrong canyon.

In the end, our itinerary had time to visit both. The opportunity to see the difference between the two was great and I'm glad we did both. Understandably, not everyone will have time to visit both. Or, you're researching Upper vs Lower Antelope Canyon in order to save some money (it's not cheap).

There's a clear winner in the Upper vs Lower Antelope Canyon debate. This post will take you through which one is better and why.

Which tours did we choose?

You MUST book tickets through a tour company to visit both Upper and Lower Antelope Canyon. Visiting on your own is not an option.

We did our Lower Antelope Canyon Tour through Thunder Travel and couldn't recommend them enough. We booked through Viator (usually my preference for booking tours). Oddly enough the tickets were cheaper on Viator vs booking directly with the tour company. 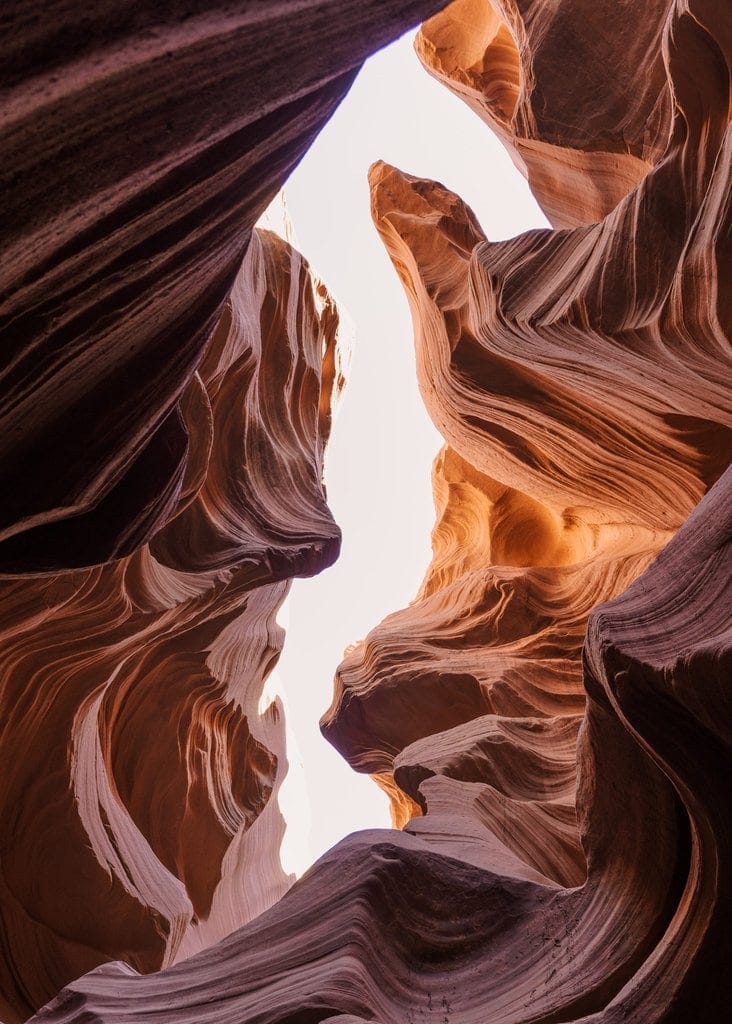 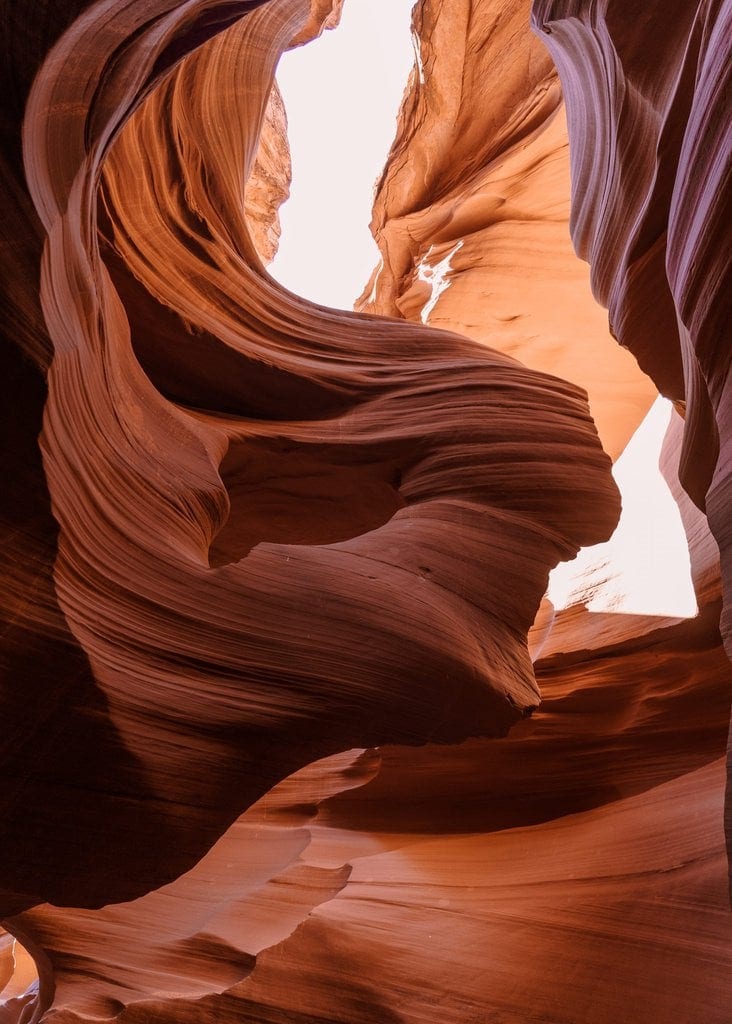 Upper or Lower Antelope Canyon - which is best?

Lower Antelope Canyon was not as rushed

Upper Antelope Canyon felt very rushed the entire time. It's obvious the tour company is cramming as many tours in one day as possible.

The entire tour I felt like we were on the heels of the tour in front of us. At the same time felt like the tour behind us was rushing us to move forward. Basically, you feel sandwiched between tours the entire time.

This means you rarely get an opportunity to get a photo without people in it since there are always people in front and always people in back. I actually felt bad for the tour guides who were having to balance not holding up the tour behind us while also giving a "good" experience for the people on their tour.

BEST BREAKFAST IN SCOTTSDALE | WHERE TO BRUNCH 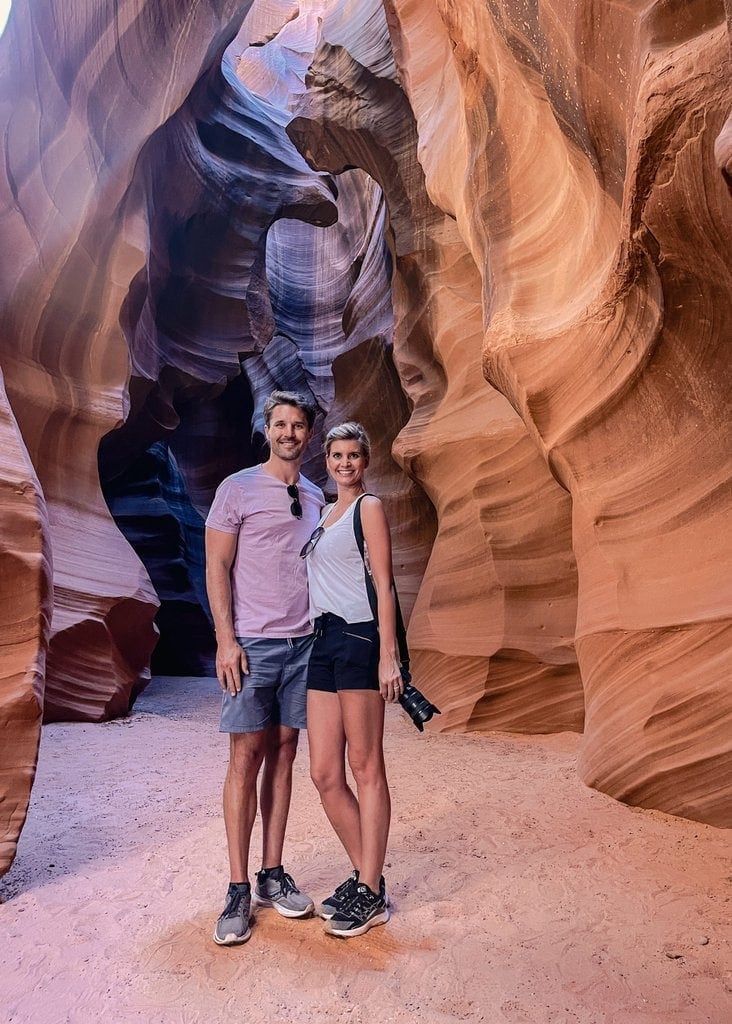 Our one and only photo together in Upper Antelope Canyon 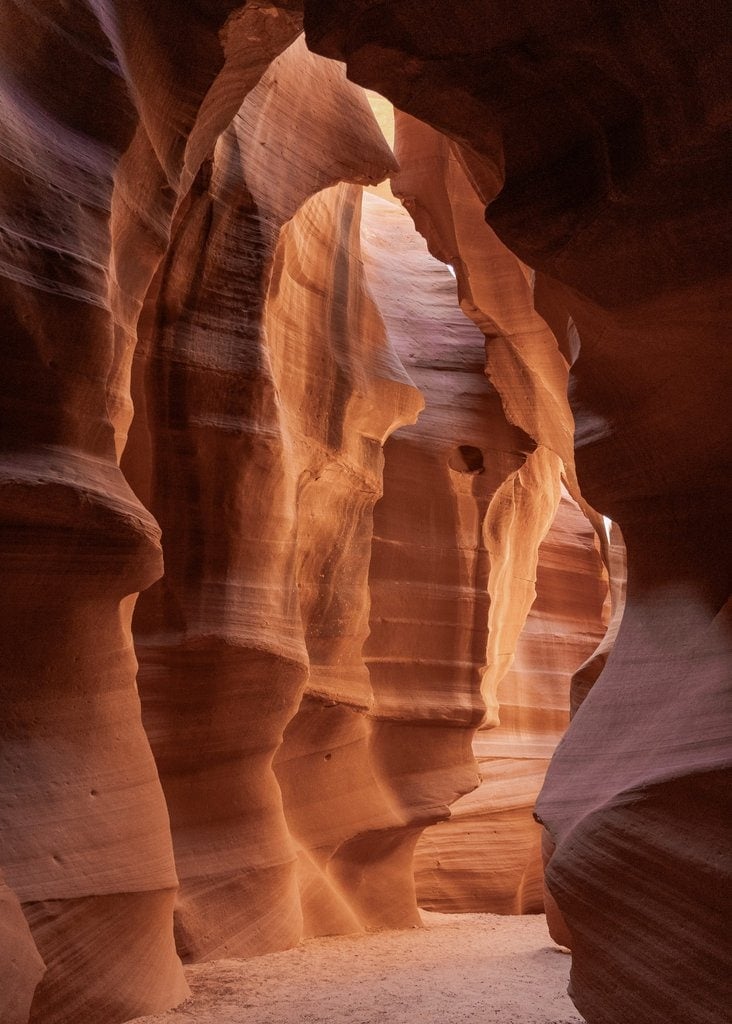 We were given a few opportunities to take photos, but it was nothing compared to Lower Antelope Canyon.

During our tour, one of the parties kept complaining saying "why do you keep rushing us? We barely have time to take any photos. This tour was expensive and we are being rushed the entire time".

At the moment, I didn't really get why they were complaining. I figured this is just how it goes with Antelope Canyon. 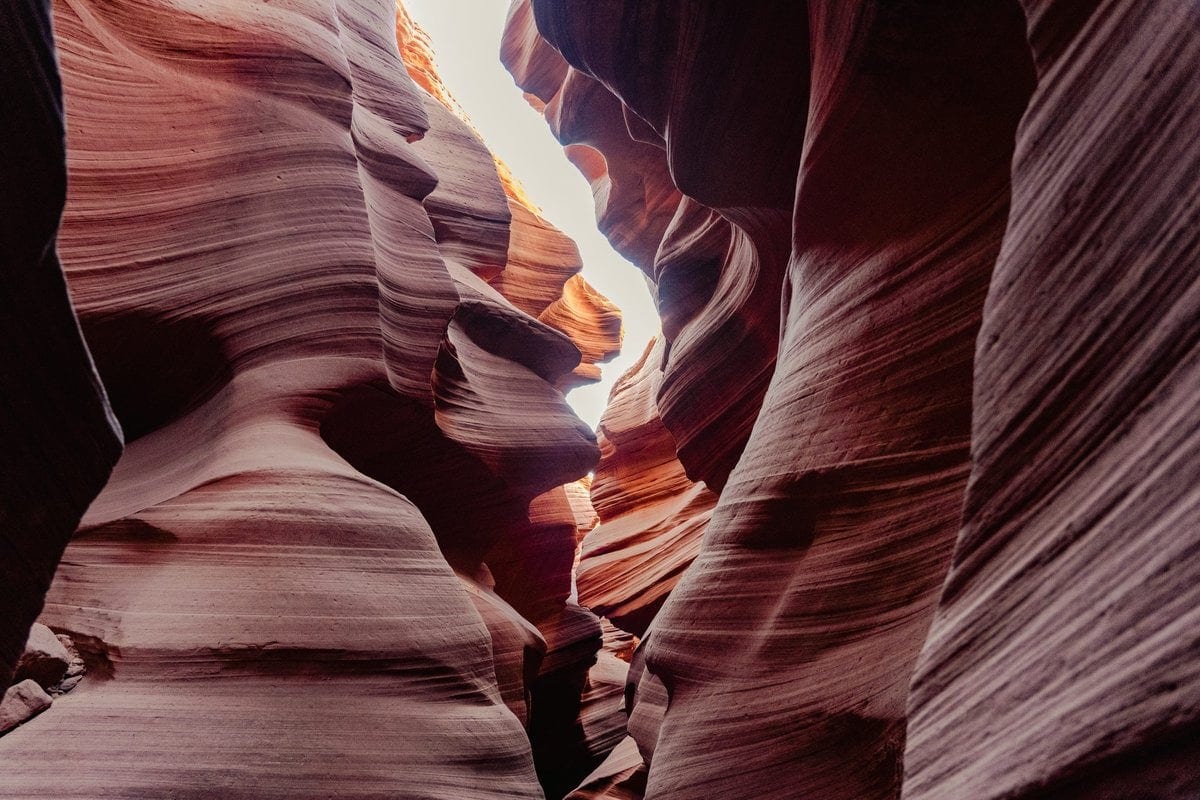 Unlike Lower Antelope Canyon, you have to drive to Upper Antelope Canyon. It's a very bumpy 15 to 20 minute drive in a big van. If you get car sick, this may not be the best option for you.

Assume 40 minutes of driving roundtrip, 15 minutes walking to and from the canyon entrance, and you're left with only 40 minutes inside the actual canyon. Which may seem like a fine amount of time, especially to get photos, but the issue is that much of that time is waiting for the tour in front of you to move on. So technically, you're not able to use that extra time "waiting" to take photos since there are people everywhere.

The Lower Antelope Canyon tour spends most of your 1.5 hour tour time inside the canyon. It's about a 10 minute walk to the canyon. So while the advertised tour times are about the same, the amount of time you spend in the canyon is considerably different between to two.

Lower wins by a long shot in the Upper or Lower Antelope Canyon debate for time spent in the canyon. 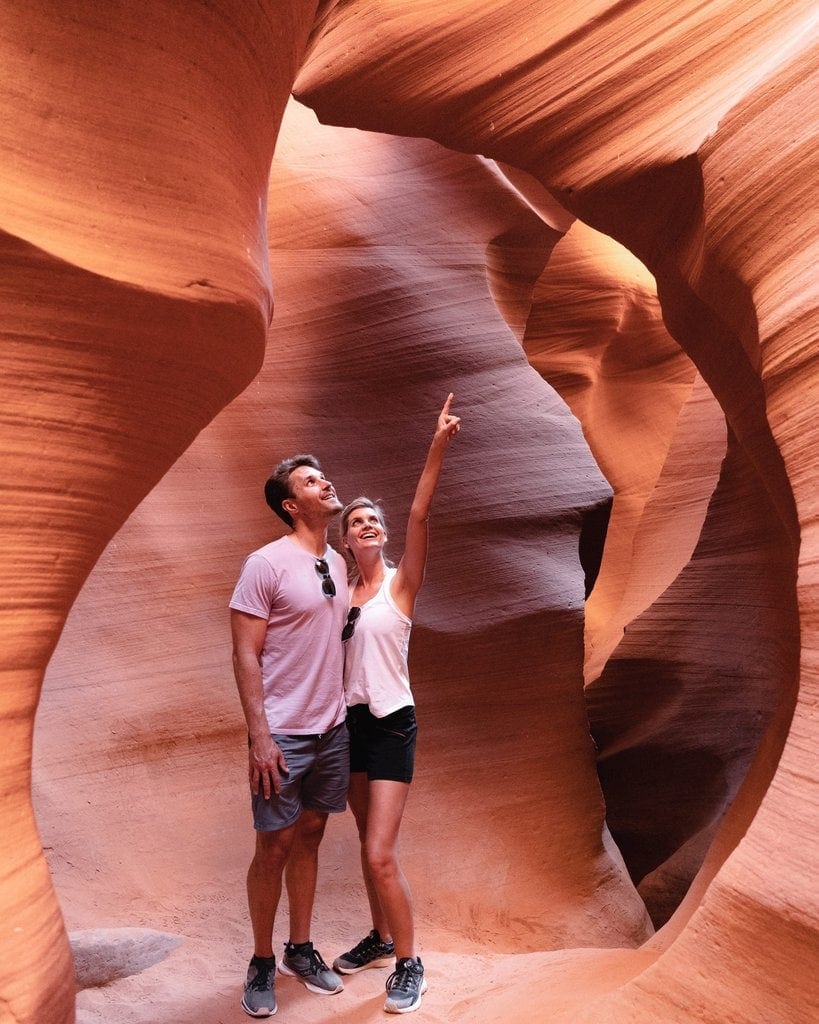 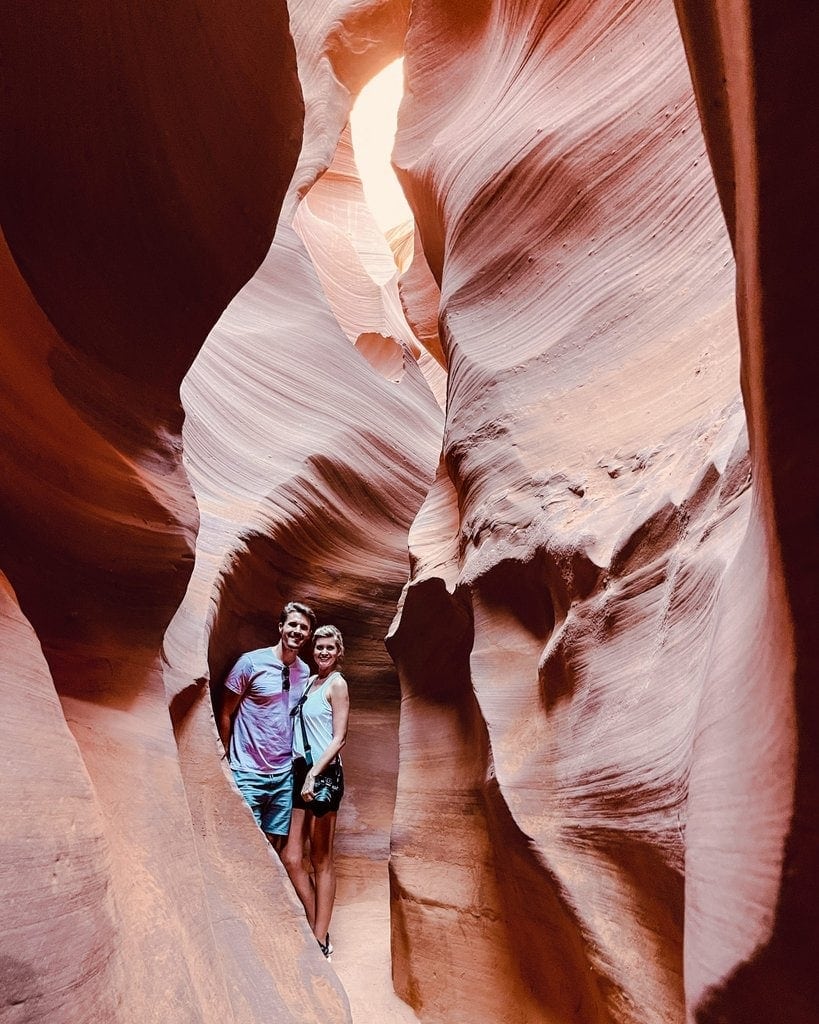 We already discussed that with Upper Antelope Canyon you are constantly surrounded by other people. Not the case with Lower Antelope Canyon. The tours felt much more spaced out and I never once saw the tour in front of us. There were only a handful of times I realized there was a tour behind us and that's because I stayed behind to take some extra photos.

Lower Antelope Canyon is much more narrow and twisty than Upper. This makes it really easy to get photos with no one in them. In fact, there were many times you feel completely alone because with all the twists and turns you can't see anyone in front or behind you.

With Upper, I felt like I was on a group tour the entire time.

In general, and this might just be because we had more time and our guide was better and showing us where and how to take photos, but the composition of the shots and the general look were better in Lower Antelope Canyon. 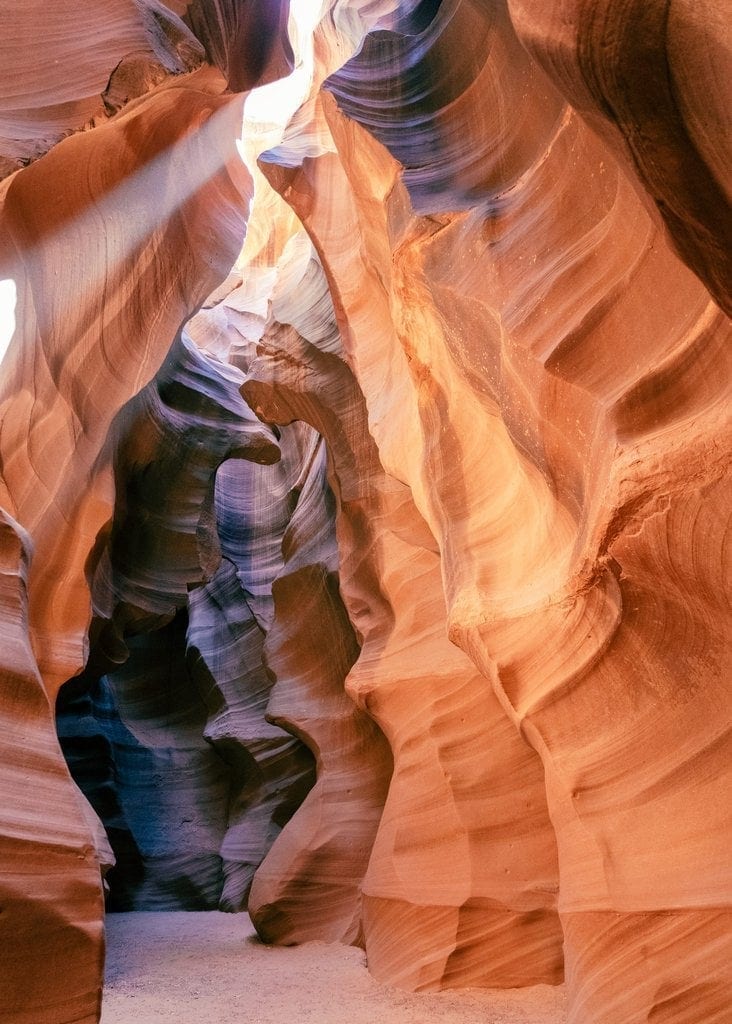 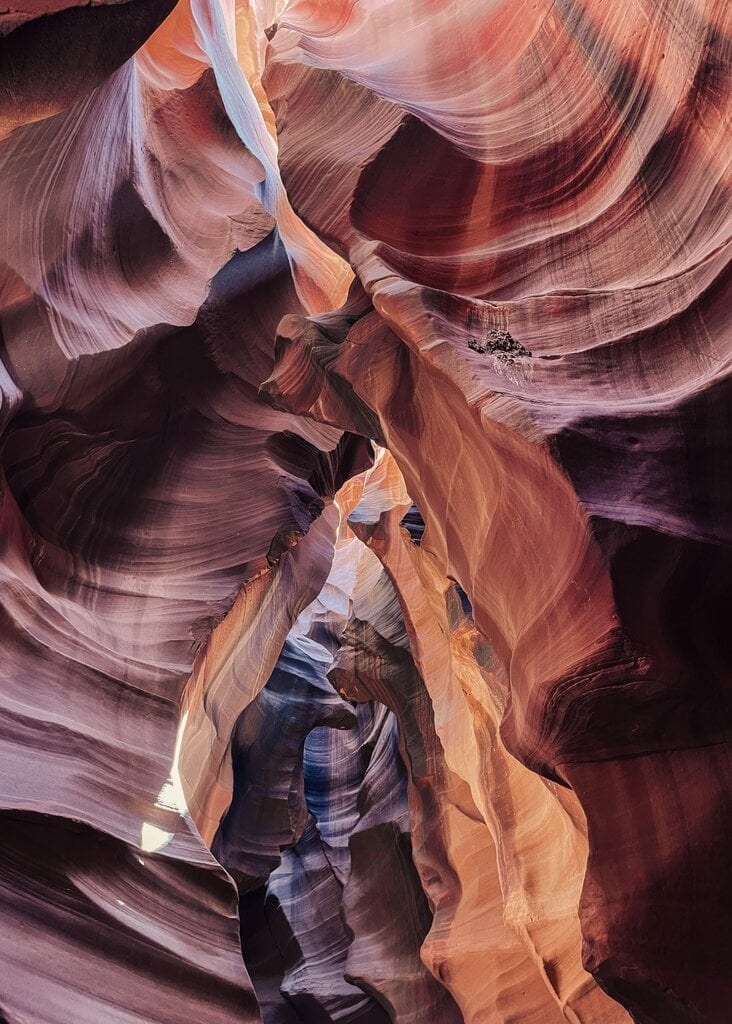 What about the light beams with Upper Antelope Canyon?

One of the main reasons people visit Upper Antelope Canyon is to get the famous light shafts. You'll usually see this if you book an afternoon tour (11:00 am to 1:00 pm). September and April are the best months to catch these light beams.

We booked the 12:25 pm tour (in September) and didn't really see any significant light beams. Even if we did get to experience those light shafts, it still wouldn't be worth it to pick Upper vs Lower Antelope Canyon for all the reasons I've gone through above.

As mentioned earlier, Lower Antelope Canyon is a lot more narrow and curvy than Upper. There were many moments where I felt a world away, completely alone for a minute or two, and able to really take in my surroundings.

I could do this because with the deep twists and turns combined with a trail that is just narrow enough for one person to fit through, you're left with the illusion that you're alone. You don't see anyone in front or behind you. I never had a moment like that in Upper Antelope Canyon. 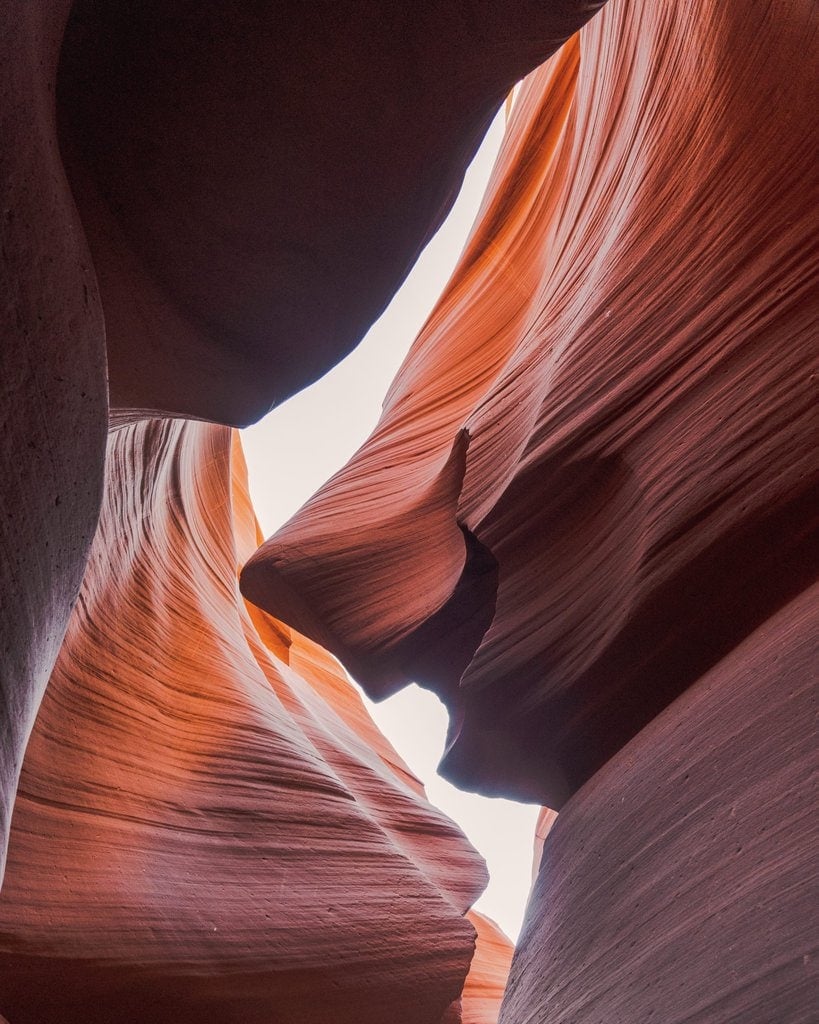 Our guide for Lower Antelope Canyon was considerably better than Upper. Now, to be fair, this isn't necessarily because the Upper guide was poor. I feel like they are just given a difficult situation with how many tours Upper Antelope Canyon crams into one day.

Because we weren't as rushed on the Lower Antelope Canyon tour, the guide really went out of his way to point out photo opportunities. Not only did he point them out, but he also helped position our camera to to get that "exact shot". He took several pictures of us without us even having to ask.

With our Lower Antelope Canyon tour, the guide would let us wander at our own pace and didn't care if we lingered behind to snap a few extra photos (as long as we didn't take advantage to where we couldn't catch up).

The Upper Antelope Canyon tour was a different story. There was only one spot where we were able to get a photo with us in it during the tour. Only a handful of photo opportunities were pointed out by our guide, and not with the detail and care that our Lower guide provided.

Our Upper Antelope Canyon guide would yell (not in a mean way) if we strayed behind. I don't fault the guide for this because the tours were so back to back, if you stayed behind at all you were holding the other tour up. 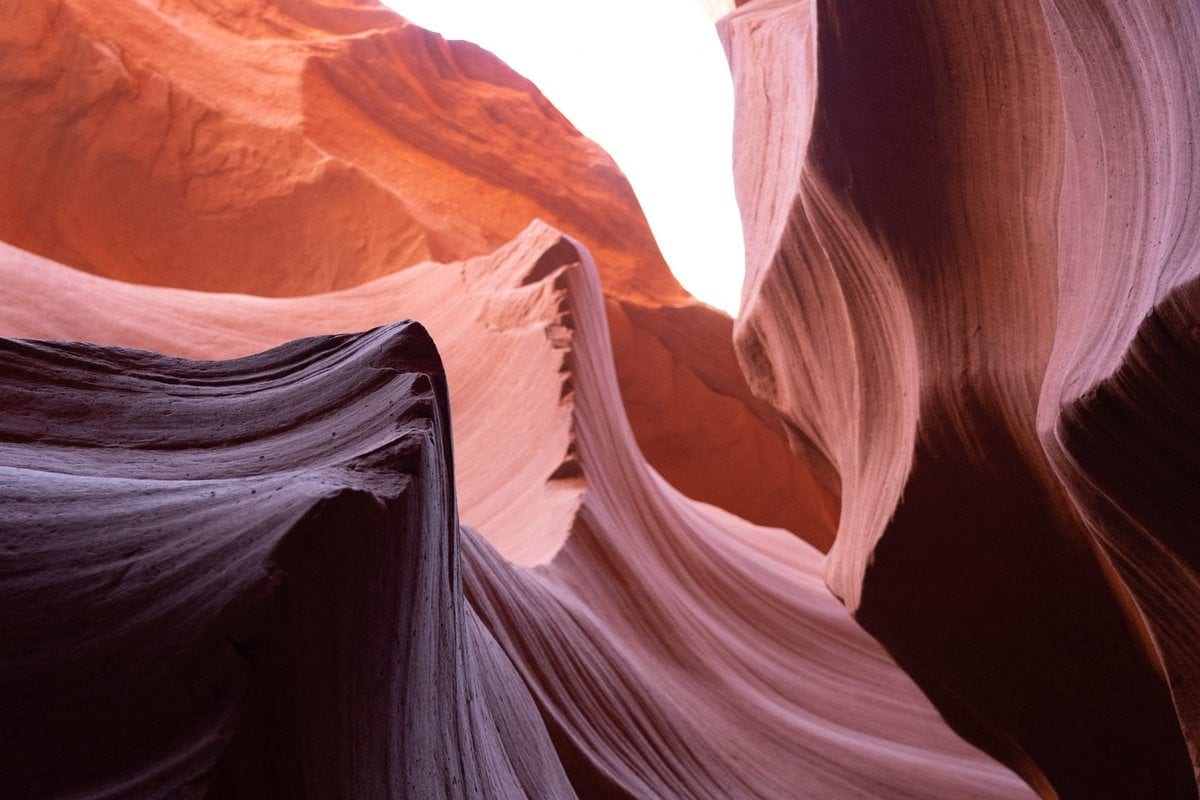 Who should choose Upper vs Lower Antelope Canyon

You're visiting in September or April and you're a photographer and dying to get those "light shafts". Even in this situation, you're not guaranteed to get the light shafts.

Since you have to book the tour in advance, the day you go out could be cloudy. Or you book the 12:25 pm (like us), which is supposed to have the shafts, only to go and not really experience any impressive light beams.

Things I would have done differently

For photographers, early to late morning is best for lighting. We did our tour late afternoon, which I would not recommend. I had to deal with a lot of sun flares when trying to take photos in certain areas.

I would have also gone for an earlier time slot for Upper Antelope Canyon. Our tour started at 12:25 pm. It's recommended to tour between 11:00 am and 1:00 pm to get those beautiful light shafts.

Since it took 20 minutes to drive to the canyon, we weren't technically in the canyon until around 1:00 pm. I didn't experience any significant light shafts and I think it's because we were too late. 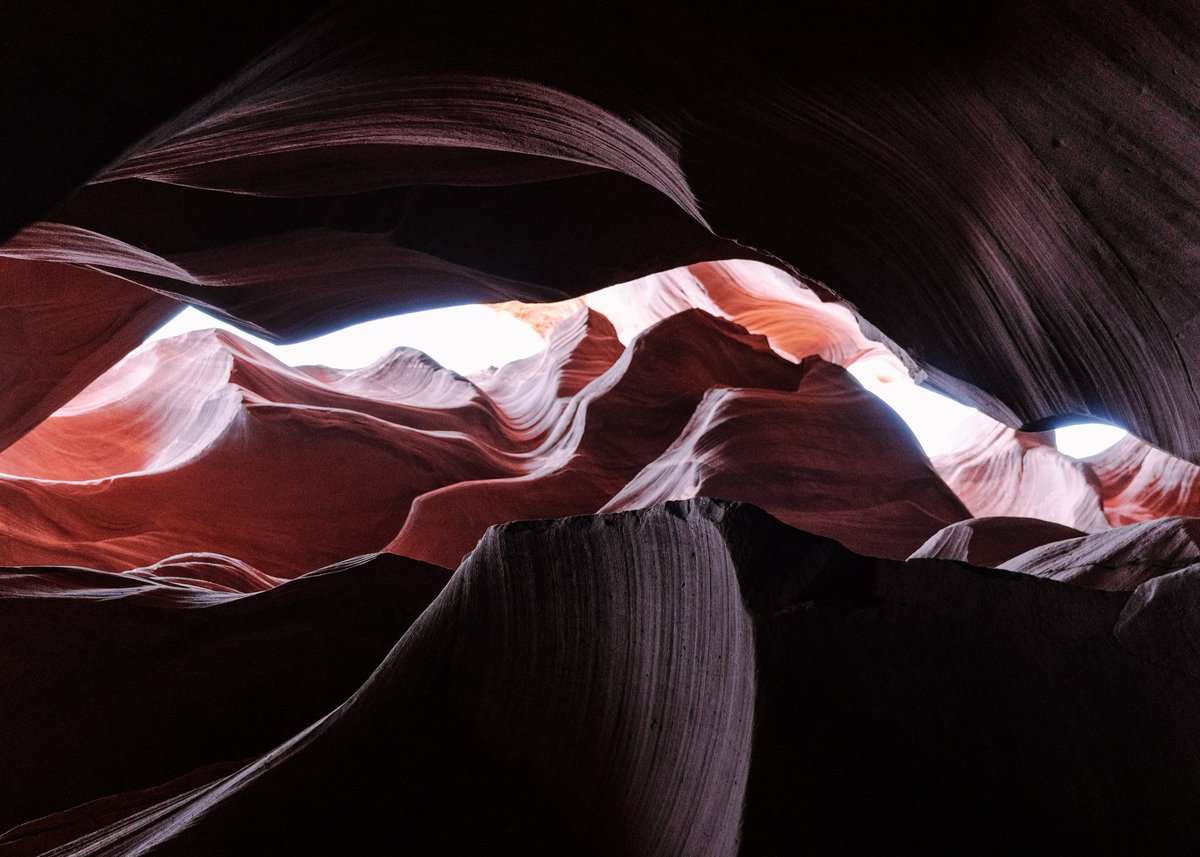 Do your due diligence when purchasing tickets

There are a lot of scams out there (including on TripAdvisor) that are charging up to three times what the actual tour costs. Don't fret, it's easy to find the scams as you'll notice a lot of reviews calling attention to it.

The official Antelope Canyon website lists approved tour companies for Upper and Lower. Do not pay more than $120 per ticket for Upper and $65 to $90 for Lower.

Jake bought our tickets from Thunder Travel on Viator (also on TripAdvisor). Those tickets were $90 a piece (taxes and fees included).

I've since done research and found tickets for $50 ($67 after taxes and fees) each via Dixie's and Ken's Tours. I can't speak to either of these companies. All I can say is our tour with Thunder Travel was fantastic. Do your research and decide if it's worth an extra $23.

Both Upper and Lower Antelope Canyon are on land owned by the Navajo Nation. Current COVID and mask policies are extremely strict for these tours with current Navajo Nation mandates.

All guides are different, but our guide for the Upper was very strict. We could take masks off for a moment when taking photos, but would be asked to put them back on immediately. I also saw the guide in front of us getting onto people for not putting their mask back on right away.

Get ready to leave most of your belongings in the car. You can not bring backpacks (even small ones), handbags, tripods, gimbals, etc.

Basically, we could bring our phones, a camera, a water bottle, and a GoPro. They even made us take the GoPro off the little stand/hand grip.

After completing the Lower Antelope Canyon tour, I left feeling like I'd been scammed on the Upper tour given how rushed we were and how crowded it was.

Knowing what I know now I would have no hesitation to do just the Lower Antelope Canyon tour.

Upper vs Lower Antelope Canyon | Which is Better 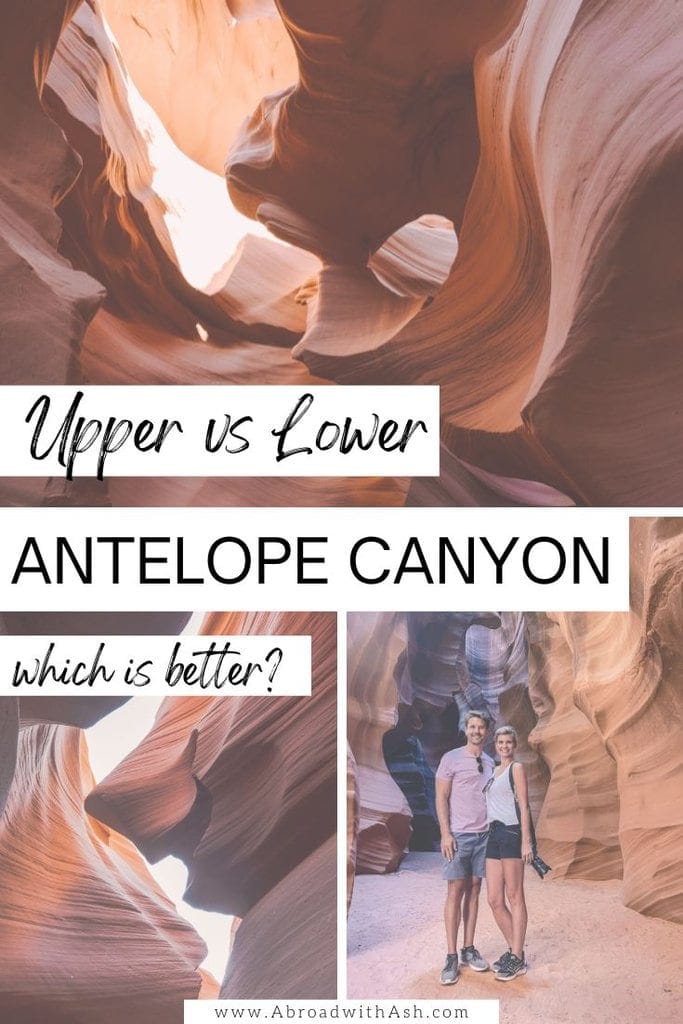 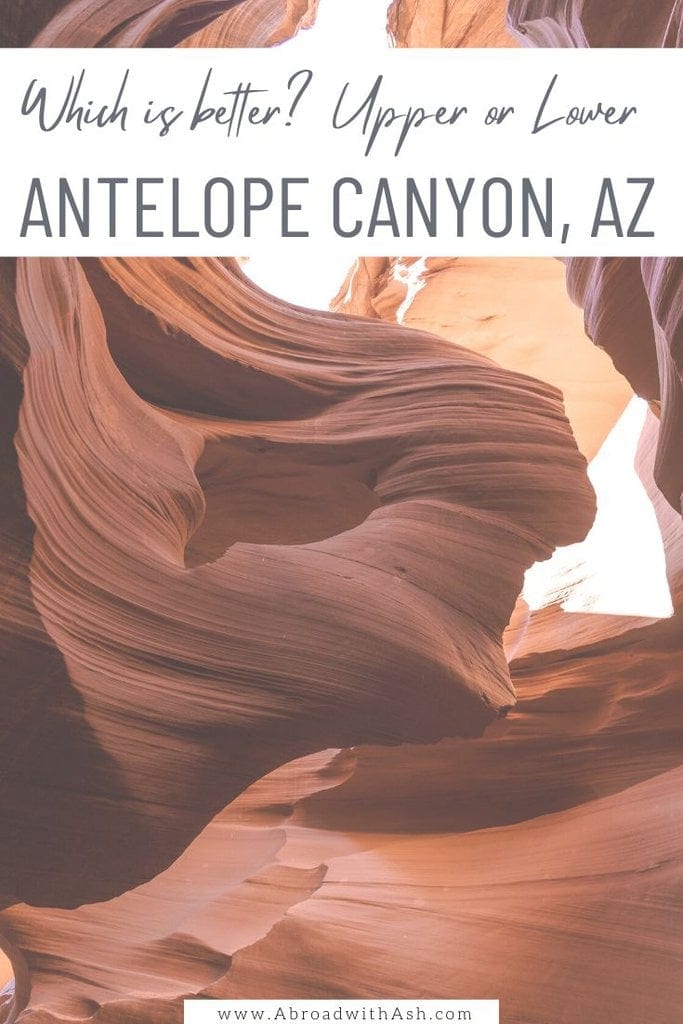 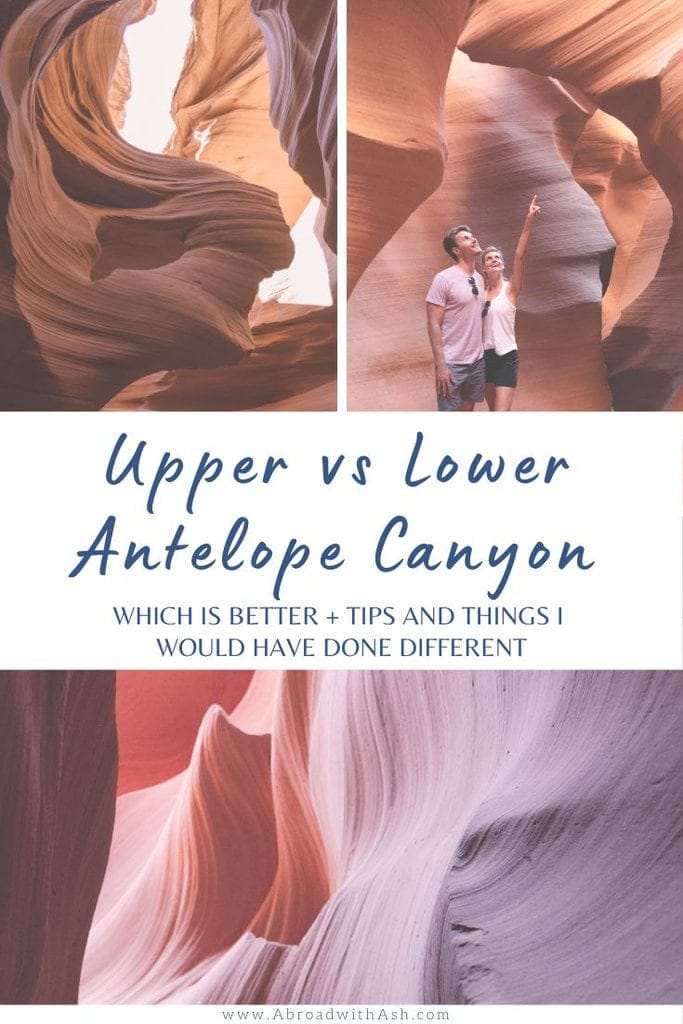 See my other Arizona blog posts 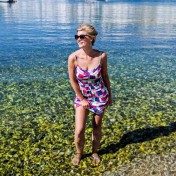