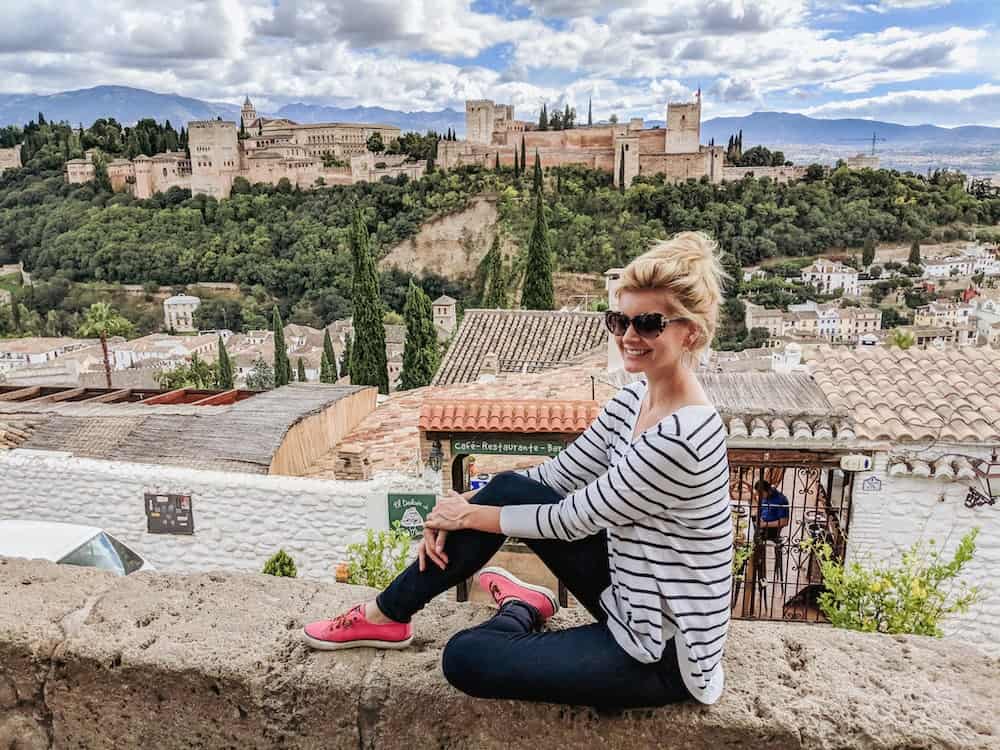 Spending a week in Spain? See my complete Spain itinerary! You'll get a taste of metropolitan Madrid as well as the Southern cities of Seville and Granada.

Spain is one of my favorite countries in the world. The stunning architecture, rich history, friendly locals, mouthwatering tapas, and famous sights make this a must for any traveler.

One aspect I particularly enjoy about Spain is how diverse it is. The 17 regions of Spain offer varying landscapes, cultures, dialects, food, and traditions. The smaller Moorish cities of the South offer a wonderful contrast to the metropolitan cities of the North.

If you're spending a week in Spain, combining Madrid, Seville, and Granada should be your first itinerary. It’s actually one of my favorite Europe itineraries in general!

LOOKING FOR ADDITIONAL IDEAS ON HOW TO SPEND A WEEK IN SPAIN? SEE  5 SPAIN ITINERARY IDEAS This 7 day Spain itinerary gives you taste of Madrid, the metropolitan capital of Spain, as well as time in the Southern cities of Seville and Granada. These cities offer a glimpse into Southern Spain’s Moorish past with intricate architecture and colorful palaces.

Seville just happens to be one of my favorite cities in the world and if given the chance, I would move there in a heartbeat.

A week in Spain is a whirlwind. Madrid, Seville, and Granada allow for some of the best sightseeing and have the easiest logistics. You won't have to fly between destinations and can easily take the train/bus. Each city is no more than 3 hours apart.

Because time is of the essence with this 7 day Spain itinerary, I highly suggest booking a flight into Madrid and out of Granada so you don’t waste precious time traveling back to your arrival city.

If you buy a roundtrip ticket to Madrid, you can take the train from Granada to Madrid or fly. Flying will take 1 hour and the train will take at least 3.5 hours.

Why didn't I include Barcelona on this 7 day Spain itinerary?

Barcelona is also more overwhelming than Madrid. A week in Spain is already going to feel a bit rushed...trying to do Barcelona in just 2 days would be a lot. Personally, choosing Madrid over Barcelona makes more sense and is more manageable. 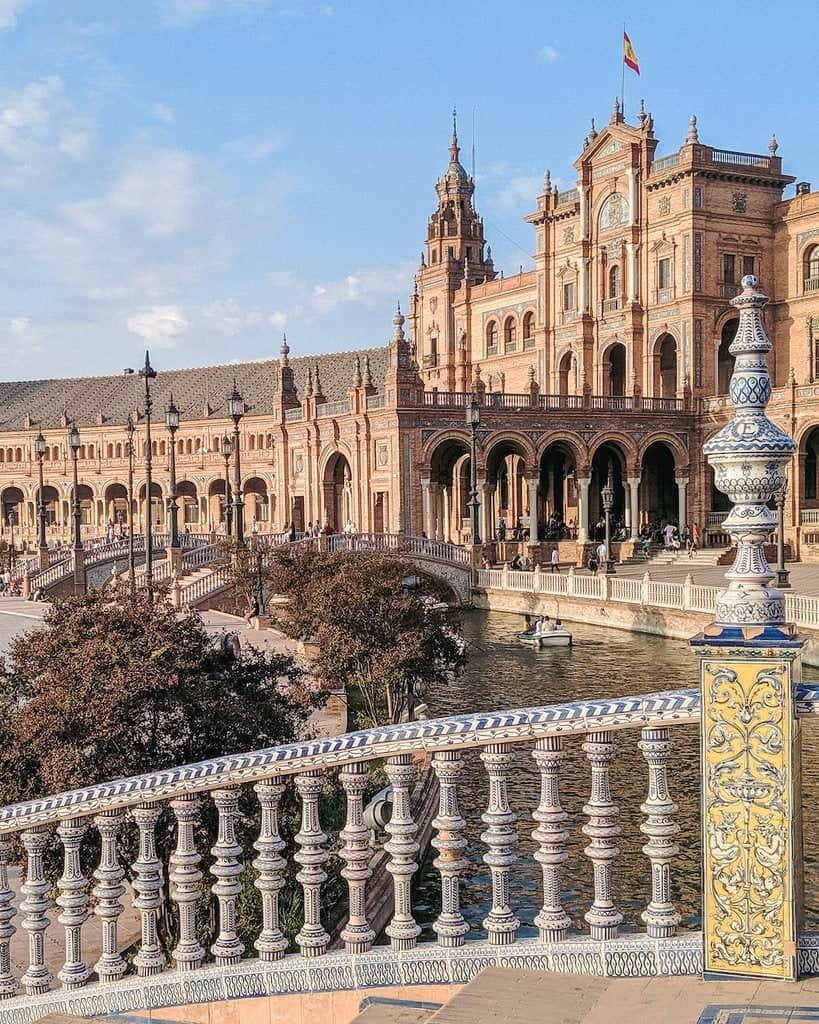 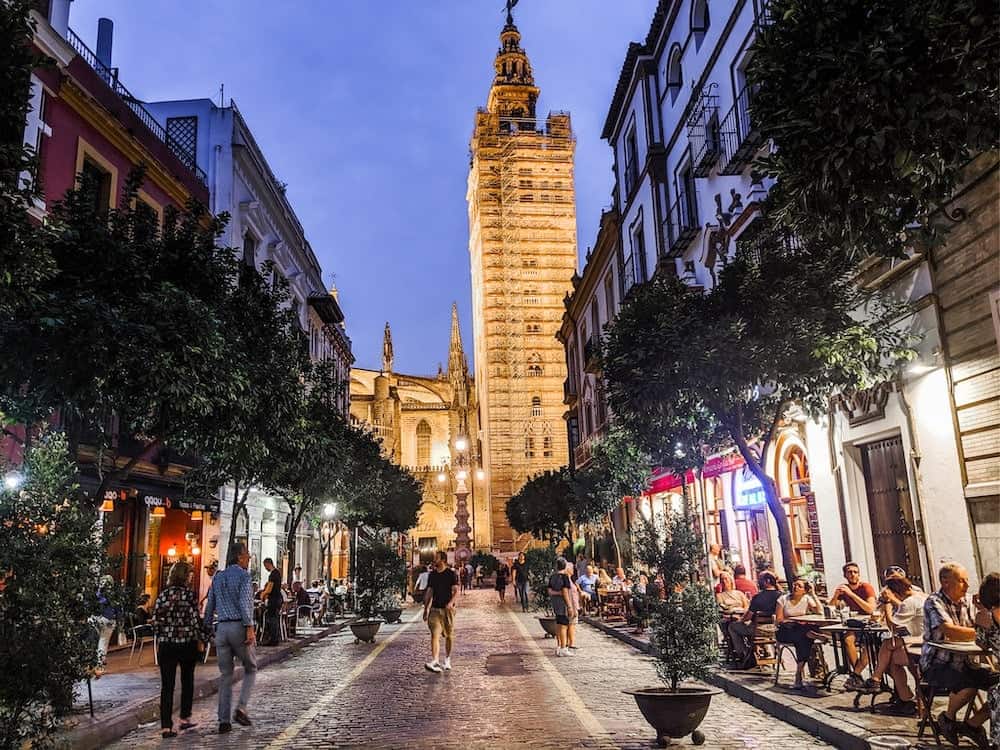 How to plan your time for a week in Spain

This allows enough time to see the main sights in the city; tour the palace, walk around Retiro park, eat and drink your way through a few tapas crawls, sample some of the best food markets, and wander a few neighborhoods.
Madrid is easy to get around with the metro and fairly compact, which makes a full/busy itinerary doable.

How to spend two days in Madrid - Detailed Itinerary

You don't want to rush the beauty of Seville. 3 nights will allow you to slow down and enjoy the sights, wander each neighborhood, and taste the spectacular tapas of Southern Spain.

Visiting the Seville Cathedral, Alcazar Palace, Maria Louisa Park, and Plaza de Espana are all musts along with attending a Flamenco show or two.

How to spend 3 days in Seville - Itinerary & Guide

WHERE TO STAY IN SEVILLE | BEST HOTELS + NEIGHBORHOODS 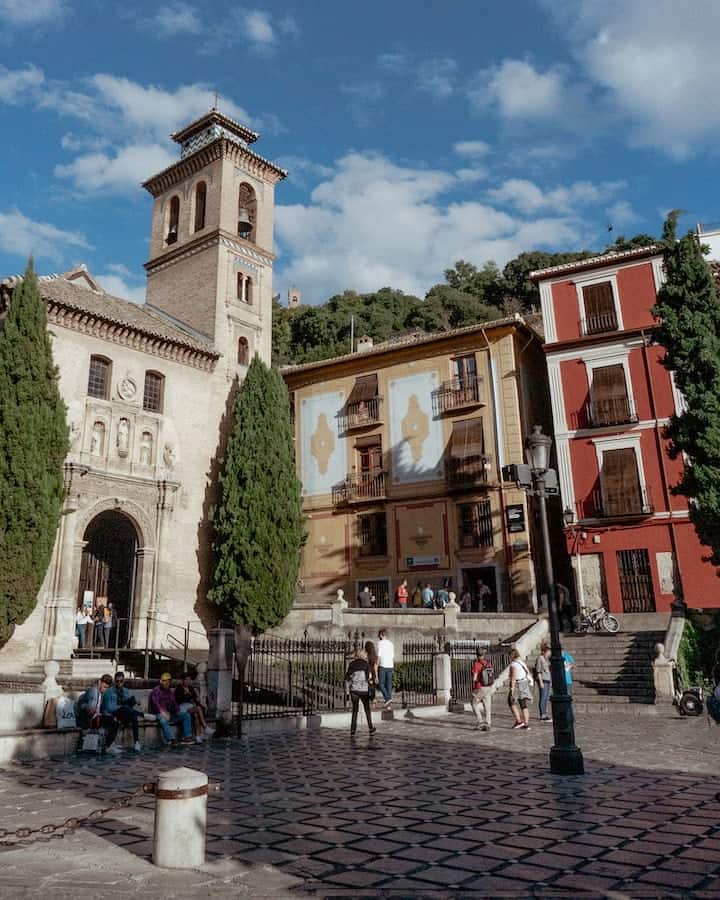 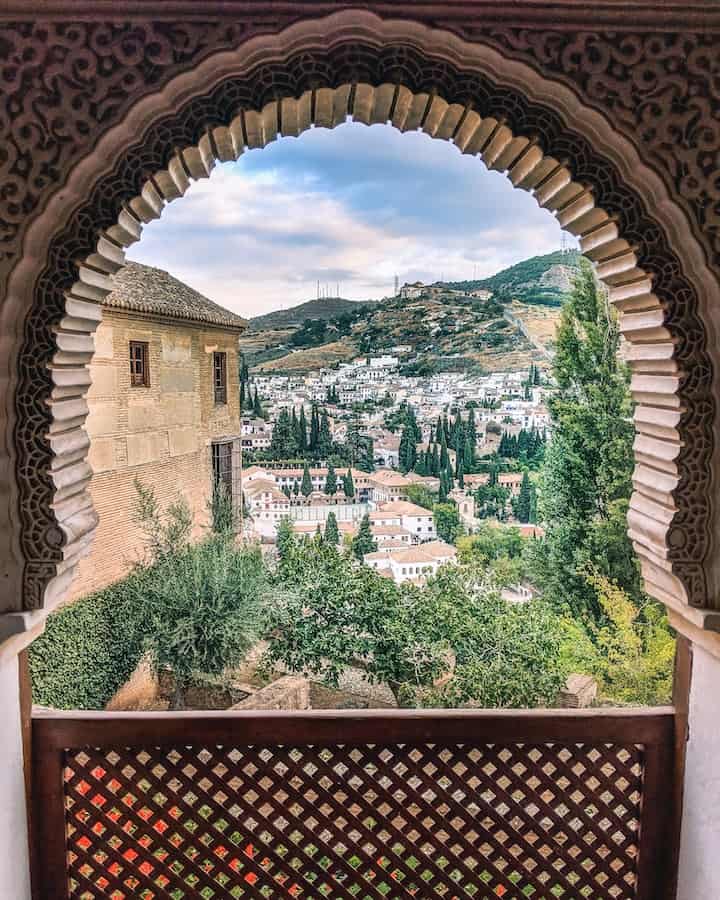 You'll have enough time to tour the famous Alhambra Palace, one of my favorite palace complexes in the world, and get lost in the twists and turns of the Moorish Albaicín neighborhood.

This gorgeous university town is small enough to travel around by foot and is fun to just wander and get lost.

TOP 10 THINGS TO DO IN GRANADA SPAIN | MUST-SEE SIGHTS

Ideas if you have more than a week in Spain

If you have more than a week in Spain and don't mind keeping a jam-packed itinerary, I would start by adding Barcelona. Fly into Barcelona, spend a minimum of 2 nights there (3 or 4 would be ideal) and then take the 2.5 hour high-speed train to Madrid.

If you'd rather not add another destination to travel to, I recommend adding 2 nights to Madrid. This would allow time to slow down in Madrid, add a few more sights and museums, and do a day trip or two. Toledo is the best day trip from Madrid and beyond picturesque with its medieval streets and hilltop location.

You could also add an extra day or two to Seville in order to squeeze a day trip to Cordoba to see the famous Mezquita cathedral (former mosque) and explore the Jewish Quarter. Two other fantastic day trips from Seville are the White Villages and Ronda and Cadiz and Jerez. 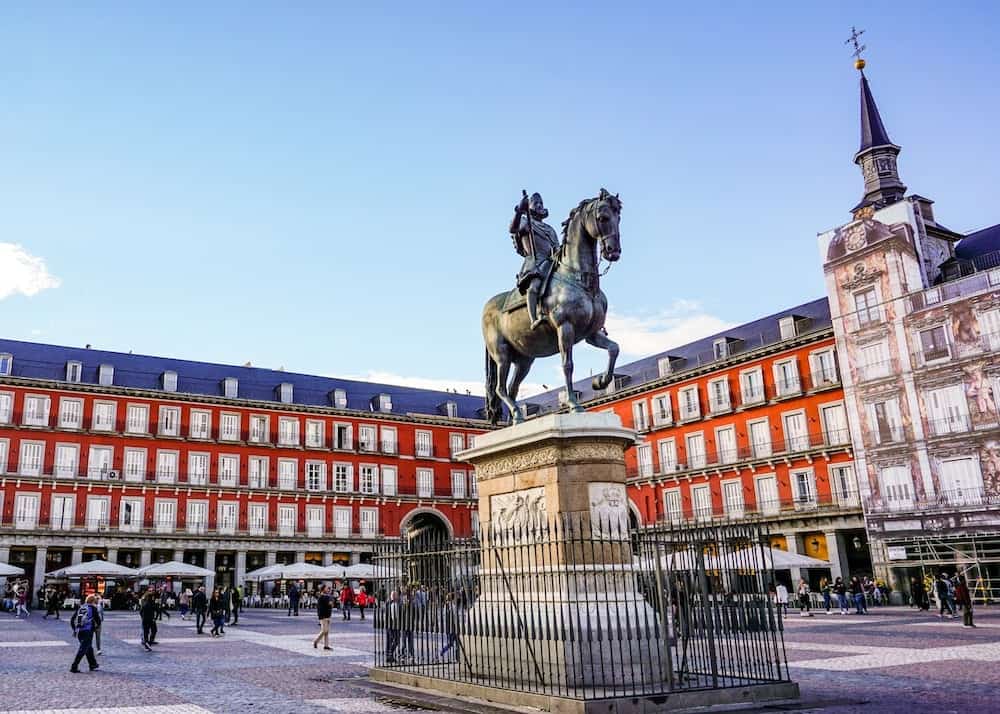 Logistics: how to get from Madrid to Seville

A fairly new high-speed train connects Seville to Madrid in just 2.5 hours. The completion of this route was a game changer as it eliminated the need to fly or take the slow 6 to 7 hour bus ride.

Traveling by train is enjoyable, easy, and cheap, and a big reason why combining Madrid and Seville in a 7 day Spain itinerary is a no brainer.

Trains depart from the Madrid Atocha train station and leave about every hour. Tickets are $50 to $60 if booked in advance.

Keep in mind that this particular route can sell out...which I learned the hard way when traveling during a holiday weekend. Book your ticket in advance!

The Seville train station is a 20 to 25 minute walk from the city center. Depending on where your hotel is, you might be able to walk. Otherwise, book an Uber. They are cheap and plentiful in Seville and works just like in the USA. 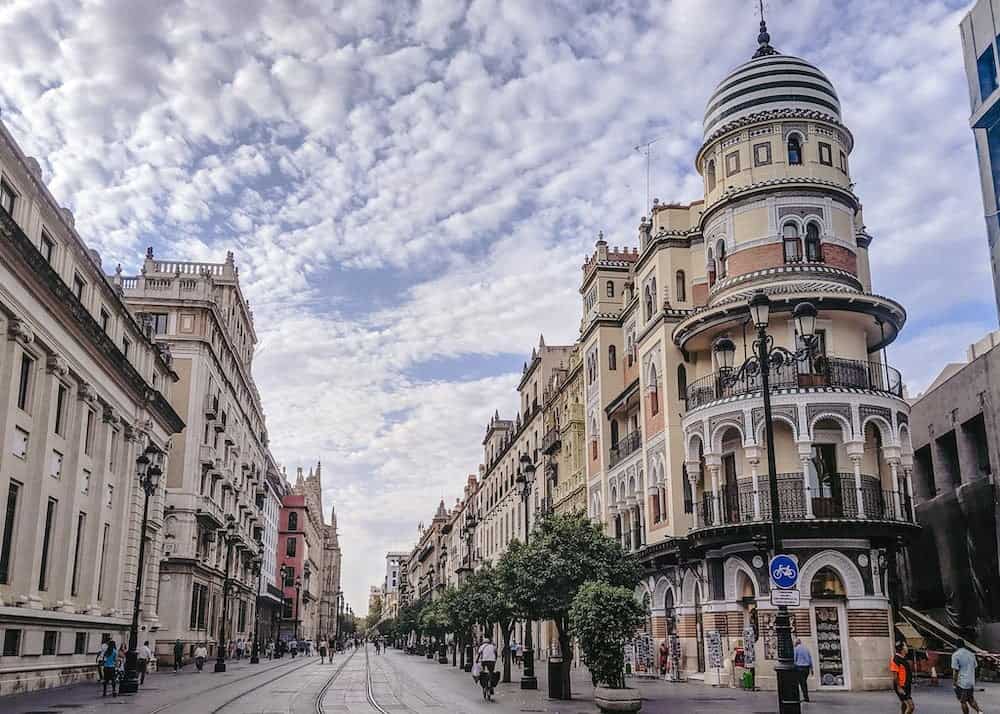 Logistics: how to get From Seville to Granada

Take the 3 hour ALSA bus from Seville to Granada. Renfe is currently working on a high-speed train to connect Granada to other cities like Madrid and Seville.

Construction started in 2015 and it has yet to be announced when the new service will be completed. As of this writing (May 2022), it's still not finished.

I traveled from Granada to Seville in October 2018. I had to take a bus for the first hour and transfer to a train to complete the journey. This will be the case for any journey into and out of Granada by train. The total travel time between the two cities combining bus and train is about four hours.

If the new high-speed train is not completed by the time you travel, I recommend saving yourself a headache and just booking the bus for the entire journey.

You'll need to take an Uber from the ALSA bus stop to your hotel as it's about 40 minutes from the city center. Or, use your Google Maps to find a bus. Input your hotel address in Google Maps, select "directions", then select the icon at the top that looks like a tram (between the symbol of a car and a person). This will show public transportation options.

Public buses are constantly running to the city center and cost under €2 euros a person.

Hopefully this gives you a head start in planning your itinerary for a week in Spain. Visiting Madrid, Seville, and Granada offers a look into the different cultures Spain has to offer. I particularly like the contrast between the metropolitan splendor of Madrid and the old world charm of southern Spain. To say the least, this itinerary will not feel redundant.

Just know that once you visit, you’ll want to return to Spain again and again.

A WEEK IN SPAIN - ITINERARY FOR MADRID, SEVILLE, GRANADA 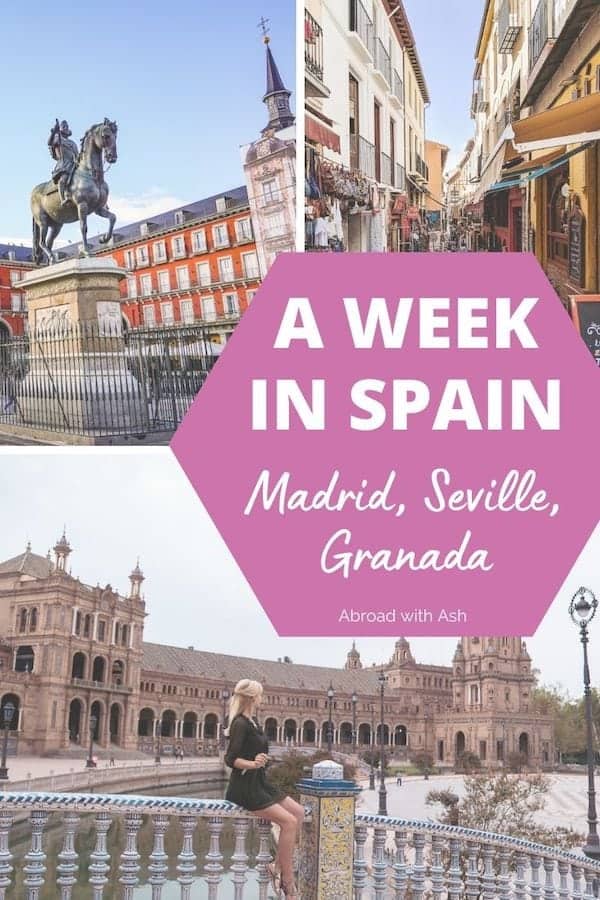 How would you spend a week in Spain? Let me know in the comments below!

As an Amazon Associate, Abroad with Ash earns commissions from qualifying purchases. Some links throughout this site are affiliate links, which means that if you click through a link on Abroad with Ash, we earn a small commission. This will never cost you extra and the income goes to keeping this site updated and free for everyone!